It is believed that the burglary took place overnight between Saturday 5 and Sunday 6 July.

Officers from Southwark CID are investigating and no arrests have yet been made.

Anyone with information should call police on 101 or contact Crimestoppers anonymously on 0800 555 111.

A man who attacked and raped a woman in the street was this week sentenced to seven years in jail at Woolwich Crown Court.

24-year-old Steven Dunne from Peckham had pleaded guilty on the 5 March to one count of rape and one count of robbery following the attack on 10 November 2013.

The victim, a 27-year-old woman, was walking to work along Surrey Quays Road at around 6.45am.

As she made her way along the street, the victim realised she was being followed by Dunne, who was wearing a hooded top.

Dunne suddenly rushed at the woman and grabbed her, forcing her from the street into bushes where he orally raped her and robbed her of cash. He also threatened to kill her during the ordeal.

Dunne made off from the scene, threatening the victim that she should remain in the bushes until for five minutes after he had gone. Once she was sure Dunne had left the scene, the victim reported the incident to police.

The victim was supported after her ordeal by trained officers from the Met’s Sexual Offences, Exploitation and Child Abuse (SOECA) Command and staff at Haven. Officers obtained DNA evidence which matched that of Steven Dunne.

Dunne was subsequently arrested on 15 November 2013 and charged the same day.

PC Carol Day said: “Steven Dunne committed a violent and terrifying rape on a woman walking to her workplace in the early hours of the morning.

“The victim in this case was traumatised by the attack, but with support has found the determination to see her attacker sent to prison for a long time.”

Detective Inspector Faye Churchyard  said: “The victim was subjected to the terrifying ordeal that all women fear, being attacked alone on a deserted street.

“She has seen justice today in the conviction of the man who attacked her.

“We hope this sends a strong message to all victims that they will be supported and that justice will prevail.

“There may be others Steven Dunne has attacked and I urge them to come forward and tell us what has happened to them.”

The St James Supermarket at the corner of Southwark Park Road and St James’s Road is facing a review of its 24-hour premises licence.

Prevention of Crime and disorder

The prevention of public nuisance

The protection of children from harm

The 24-hour Costcutter store in Southwark Park Road is facing a review of its premises licence after officers from Southwark Council’s trading standards department and HM Revenue & Customs seized 210 bottles of alcohol.

During the inspection on 31 January officers found dozens of bottles  where no duty had been paid and/or the product was counterfeit:

Read more about the irregularities found during the inspection on the council’s licensing register.

A crack house in Bermondsey has been closed down by Southwark Council and the Metropolitan Police after residents raised concerns about drug use and antisocial behaviour.

The property, located in Tissington Court, was closed down under Section 2 of the Antisocial Behaviour Act 2003 after it was found to be used in connection with the unlawful use, production and supply of a Class A controlled drug. A catalogue of complaints from residents was lodged to the police and the council about drug use in children’s playing areas, noise, human waste and abandoned drug paraphernalia and vandalism in the quiet residential block .

After several warnings and offers of support from Southwark Council, a closure order was  obtained in November 2013.

Following this the council obtained a Possession Order from the County Court to permanently evict the tenant from his home, which will now be made available to a more deserving homeseeker.

Southwark Council, who has recently reshaped its services to improve the ways it deals with antisocial behaviour complaints, has issued almost 80 closure orders, in partnership with the police, in the last five years, five of which have been obtained this year alone.

Councillor Richard Livingstone, cabinet member for community safety, said: “The residents of Tissington Court were made to endure an awful campaign of criminality and disturbances at the hands of one resident and his associates.

“By taking out this closure order and subsequently evicting this tenant, we want a clear message to be sent that we will not stand for crime and anti social behaviour on our estates.

“I would like to thank the residents of Tissington Court for reporting the crimes. Without their full support this issue would have persisted and many more would have been made to feel vulnerable and intimated in their homes. To anyone else experiencing serious antisocial behaviour in their community, please do come forward for support in resolving the issue.”

Police investigating the violent robbery of a money transfer bureau in SE16 have released a picture of a man they would like to trace in connection with the incident.
The man is one of three, all armed with knives, who robbed the Brazillian money bureau Cerro Catedral in Jamaica Road at around 6.45pm on Tuesday 7 January.

The suspects entered the store and forced open a door leading to the staff only area.

The member of staff on duty at the time was punched in the face and then kicked whilst on the floor by one of the suspects.

He was then threatened with a knife and marched to the store’s safe with a knife to his neck. The staff member opened the safe and the men placed more than £100,000 in a bag before fleeing the scene in the direction of Southwark Park Road.

Officers were called and an investigation has been launched by detectives from the Metropolitan Police’s Flying Squad.

The suspects are described as:

1. A light-skinned black man with a shaved head, around 5ft 6ins tall, aged around 30ys. He was wearing a black hoody and spoke with an English accent.

3. Dark-skinned black male, muscular, wearing all black clothing. His face was covered during the incident.

Detective Sergeant David Barnfather, of the Flying Squad, said: “We are keen to hear from anyone who knows this man or has information about him and his whereabouts.

“This was a violent robbery that was deeply traumatic for the victim and I would urge anybody who can help this investigation to get in touch immediately.”

Officers can be contacted anonymously via Crimestoppers on 0800 555 111.

Superway Express at the corner of Jamaica Road and Southwark Park Road has a 24-hour licence.

That licence is now up for review – and the list of grounds for the review is pretty hair-raising. 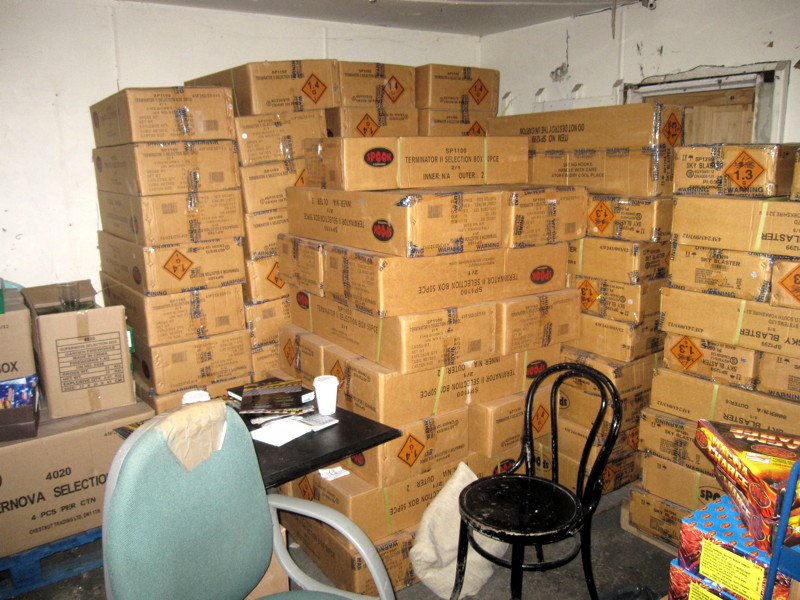 Police have seized  almost two tonnes of illegally stored and sold fireworks with a net explosive weight of approximately 230 kg.

The haul was found at a property in Galleywall Road when police executed a search warrant on Thursday. A man was arrested at the premises.

A 61-year-old man has been bailed to return to a south London police station in November.

Detective Superintendent Chris Hafford said: “This is a fantastic example of partnership working. We will continue to work together with our partners to reduce anti-social behaviour and increase safety around Halloween and bonfire night.

“We hope this find will go some way towards ensuring the local community can enjoy the festivities safely.”

Southwark Council is to spend £250,000 on works at Seven Islands Leisure Centre to create a new base for police officers formerly based at Rotherhithe Police Station.

The cash comes from saving the council has made on its rent bill by buying the freehold of its Tooley Street headquarters.

From a newly published council report:

Rotherhithe Police Station is scheduled for closure and disposal. The council has offered part of Seven Islands Leisure Centre as a neighbourhood policing team base for the North East cluster. The MPS have confirmed that this is operationally useful and their property team have carried out a site visit and are working with officers to the most feasible use of the site. Whilst this is still in the early stage, the estimated cost to the council of the work needed to bring this into use as a police base is in the region of £250,000.
Architects have been commissioned to undertake a feasibility survey at the leisure centre site that considers the MPS operational requirements. This will be completed by early October 2013 and will establish estimated costs and options for the site. The cost of the feasibility survey is £8,000 and is included in the £250,000 estimated project costs for the police station.

The same report reveals that the council plans to spend £40,000 on closed circuit television at Greenland Quay:

Close [sic] Circuit Television (CCTV) at Greenland Quay – As part of the CCTV refresh programme two redeployable cameras were due to be sited at this location. This area has experienced high volumes of robbery and snatch incidents over the last 12 months. The funding will enable us to provide three fixed zoom public space surveillance cameras and operational connection to the councils CCTV operational control room. Re-deployable cameras are not a suitable option here due to the lighting columns. A design specification will be

Officers from the Metropolitan Police’s central e-cime unit (PCeU) have arrested 12 men in connection with an audacious attempt to take control of a bank’s computer in order to steal from them.

On Thursday officers arrested 11 men aged between 23 and 50 years in Hounslow in connection with an allegation of conspiracy to steal from Santander Bank.

A further arrest of a 34-year-old man was made at Vauxhall Bridge Road in connection with the same offence.

Searches have been carried out at a number of addresses within Westminster, Hounslow, Hillingdon, Brent and Richmond, and also in Slough, where property has been seized.

The Met says that the arrests are the result of a long-term, intelligence-led, proactive operation by the PCeU.

The offence involved deploying a KVM (keyboard video mouse) device, fitted to a computer within the bank branch, allowing the transmission of the complete desktop contents of the bank computer over the network. In effect, this allowed the suspects to take control of the bank computers remotely. Those arrested are currently in custody at a London police station.

Detective Inspector Mark Raymond, of the PCeU, said: “This was a sophisticated plot that could have led to the loss of a very large amount of money from the bank, and is the most significant case of this kind that we have come across.

“I would like to thank our partners from the industry who have provided valuable assistance throughout this investigation.

“The PCeU is committed to tackling cyber-crime and the damage it can cause to individuals, organisations and the wider economy.”