SE16’s public libraries at Canada Water and Blue Anchor are expected to reopen with a limited service next week (starting 13 July).

These libraries will offer an order and collect service, which means that people must pre-ordered their books before visiting the library to collect them.

It will also be possible to return items to the library.

Due to social distancing measures public toilets, printing, wifi and study space will not be available.

This weekend Canada Water Library celebrated its one millionth loan since the library opened in November 2011.

The library awarded a prize to the member taking out the millionth loan – six year old Chinedum Odunze, when she borrowed Heart Magazine: A dream come true by Cindy Jefferies on Friday 27 July– one of five books she borrowed that day. She was presented with a £100 boo

Chinedum Odunze  said: “I think Canada Water Library is an amazing place. When I’m there, I usually leave with 8-10 books. When I read, every page of a book makes me feel like I am floating away to the place in the story. Sometimes…I like to write my own stories. I just love reading books especially when there’s an adventure!”

Councillor Dora Dixon-Fyle, cabinet member for adult care, arts and culture, said: “Canada Water Library’s one millionth loan is another great milestone for us that shows how well the library is used by the community and has been supporting literacy since opening in 2011.

“I am delighted that the one millionth loan was by one of our youngest residents and I hope her obvious love of books and reading will continue to grow as she uses the service.”

Following the one millionth visit earlier this year, Canada Water Library is running a competition to mark the library’s one millionth loan.

“Canada Water Library really has gone from strength to strength since opening in November 2011, so we are delighted to be able to mark this milestone so soon after our millionth visit,” said Cllr Dora Dixon-Fyle, cabinet member for adult care, arts and culture.

To celebrate the lucky member who borrows the millionth item will win a £100 book token, free tickets to a Culture Space show, a golden library card that allows free DVD and CD loans for a year, tea for two in the Café and the library’s top 10 issued fiction books.

Blue Anchor Library closure period for refurbishment has been extended by 2 weeks – will now reopen 12 May 2014. Apologies for inconvenience

Canada Water librarian Mike Allport has been named ‘Librarian of the Year 2013’ by the Publishers Publicity Circle.

“Southwark’s Libraries are an important hub for their local communities and this award reflects the high quality standard of service our libraries provide to all our residents,” said Councillor Veronica Ward, Cabinet Member for Culture, Leisure, Sport and Volunteering.

“We are very proud of Mike’s achievement and all our libraries staff in Southwark.

This award presented by the Publishers Publicity Circle is also in recognition of the commitment that the council has given to its libraries, and especially the extensive programme of author events and literary festivals that are on offer for all ages across the borough.”

Canada Water Library has received its one millionth visit since opening its doors to the public on 28 November 2011.

Southwark Council is celebrating this special milestone with a day long programme of events and activities for everyone to enjoy on Saturday 15 March . Activities will include a family storytime session, live theatre in the library’s Culture Space and a children’s craft session.

As one of Southwark’s newest libraries, Canada Water has won numerous architectural accolades including a Civic Trust Special Award in September 2013, with the judges praising the building as “an iconic community asset”.

Cllr Peter John, leader of Southwark Council said: “This really is a massive milestone for us, Canada Water Library has become a central part of the local area since 2011, and such high visitor numbers are proof of what a worthy investment it was. While other councils have been closing libraries, Southwark has been investing in them, and I think reaching on

e million visits on top of this is a fantastic achievement.”

Cllr Veronica Ward, cabinet member for culture, leisure, libraries and sport said: “Canada Water Library has been such an important addition to Southwark’s libraries. Not only are we incredibly pleased at how successful it has become as a focus point for the local community, but in particular it is great to see such high numbers of young people using the facilities. The wonderful programme at the culture space especially has played a huge part in this, so a big thank you to all involved.”

The team at Canada Water Library have been in touch with details of this weekly session on Monday mornings between 10am and 12 noon:

Each week we read aloud a short story and a poem, pausing inbetween to discuss what is being read. It is an informal group that provides a place to relax, a chance to make friends and a different way to share reading.

Nothing has to be read in advance and refreshments are provided.

There is no pressure to talk, to read, or even to drink tea!

Alison Clayburn has sent in details of her autumn classes: 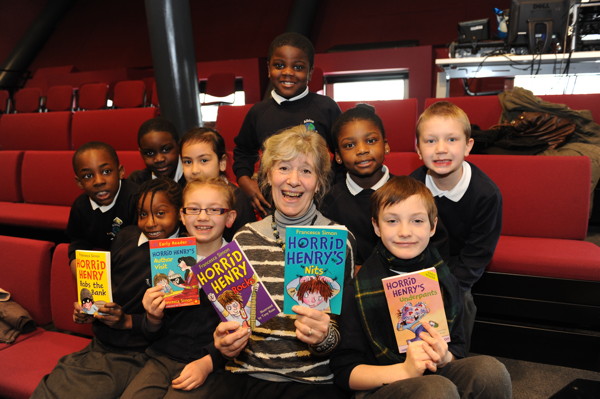 The award-winning writer of more than 45 books read extracts from the next title in her Horrid Henry series, Horrid Henry’s Nightmare, as well as sharing her experiences as a writer and signing books for the young audience of Southwark school children attending the event.

The author was joined by Cllr Veronica Ward, cabinet member for culture, leisure, sport, the Olympic Legacy and volunteering who said:

We are thrilled to have been able to bring local children closer to one of their favourite authors. We hoped to have got local children’s imaginations fired up and on the journey to becoming avid readers.

In Southwark we are excited about libraries. From our libraries in Canada Water to Peckham, we’ve continuously investing in each to ensure that they’re responsive to the local communities they serve. With over 500,000 visitors in its first year of opening, Canada Water Library has been a great success and we hope to be able to mirror this success in the new Camberwell library planned for 2014.

Commenting on the event, Francesca Simon said: “It is an absolute pleasure to visit such a thriving community library that is clearly doing so much to promote reading. This event was a lovely way to celebrate World Book Day.”

World Book Day aims to help children explore the pleasure of books and reading by providing them with the opportunity to have a book of their own, and encouraging them to join the library.

To celebrate the first anniversary of the opening of Canada Water Library, Southwark Council has launched a photographic competition.

The council is looking for the most unusual and creative images of the Piers Gough-designed building (inside and out).

The winner will be given the opportunity to feature in an exhibition in the New Year. The deadline for entries is 1 Februrary 2013. Entry forms are available at the library reception desk and further details can be found at www.southwark.gov.uk/cwlphotography

Nearly half a million visits have been made to the library in its first year of operation.

“The resounding success of Canada Water Library as proven by our visitor numbers shows that libraries are as important to local communities as they have ever been,” said Cllr Veronica Ward, cabinet member for culture, leisure and sport.

“This past year has been amazing: we’ve worked with hundreds of young people as part of the Summer Reading Challenge, welcomed the Sketchbook Project exhibition over from the USA in its only UK tour stop and the library won a RIBA Regional Award.

“Not to mention the international acclaim we’ve received from various librarians, media houses and architects around the world.

We’ve also brought our residents closer to some of their favourite authors with our regular literature evenings with top authors such as Ben Fogle, Pauline Black and Deborah Moggach to name a few.”