Police in Southwark are appealing for witnesses and information following a violent aggravated burglary in Bermondsey on St Valentine’s Day.

The incident happened at about 2.30pm on Saturday 14 February at an address in Cranswick Road, South Bermondsey.

The victim, a 63-year-old woman was home alone, speaking on the telephone to her sister, when there was a knock on the door.

She asked who it was and a man outside said he had crashed into her car. On hearing this news she opened her front door to inspect her car.

When she had opened the door,  the victim was confronted by two men.

The victim attempted to close her door but two men barged their way in to her house and closed the front door. Once inside they were shouting at the victim “Where is your safe?”

The victim – who lives on her own – informed the men that she did not own a safe. One of the suspects then picked up a bronze statue and hit the victim twice on the head.

They then attempted to drag her upstairs. She managed to escape their grip but was hit again with the statue.

The men then searched the house and stole two purses from her handbag before making off.

Police were called to the scene by the victim’s sister who heard the entire incident while on the telephone line. Neighbours who heard a disturbance also called 999.

The London Ambulance Service was called and the victim was taken to a south London hospital, were she was treated and later discharged.

Suspect 1 is described as a black male, of slim build, aged 18 to 22 years, and was wearing a dark hooded top.

Suspect 2 is described as a black male, aged 18 to 22 years, and was wearing a dark hooded top.

Detectives from Southwark CID are investigating the incident and are appealing for anyone who may have seen anything or anyone acting suspiciously in the area to contact them.

Detective Constable Carri Blackman, from Southwark CID, said: “The victim in this case is an extremely vulnerable lady. This has understandably left her extremely shaken up and we’re determined to try and identify who is responsible.

“I’d urge anyone who might have seen or heard anything unusual or suspicious in the area to get in touch with us, however insignificant you think the information may be – it could help us to solve this case.”

Detectives investigating a website from which thousands of people were able to download blockbuster films and top-rated TV shows for free arrested three men at a flat in Bermondsey on Tuesday morning.

At approximately 6.45am, detectives arrested three men aged 26, 25 and 24 – on suspicion of conspiracy to defraud; copyright theft and encouraging or assisting offences believing one or more will be committed – during a pre-planned operation.

The arrests were made by the London Regional Asset Recovery Team (LRART), who have been assisted in their investigation by the Federation Against Copyright Theft (FACT).

They executed a search warrant at a residential address on Enid Street, Bermondsey, from which they recovered digital equipment and financial documents..

The three men have been taken into custody at a south London police station where they remain.

The website was originally registered to one of the suspects in the UK but was then re-registered to the second suspect at an address in Romania. It is believed that money made from advertising on the website continued to be paid into a London-based bank account.

Detective Sergeant Neil Reynolds, of LRART, said: “The site was extremely popular. It was viewed about 70,000 times a day and, internationally, it ranked thousands of places higher than a well-known and legitimate film download site.

“It can be difficult for people to care about copyright laws being broken but the money made from such sites is often spent on funding other crime. We are looking at how much money was made from advertising on this website and where that money went to.”

Kieron Sharp, Director General, FACT, said: “Websites which set out to direct users to illegal copies of films and TV shows are engaged in criminal activity which not only reaps huge financial benefits for the individuals involved but also undermines the fundamental business model which allows for future investment in the creative industries.

“As these latest arrests show, this type of criminal enterprise will not go without action, and those involved face severe penalties.” 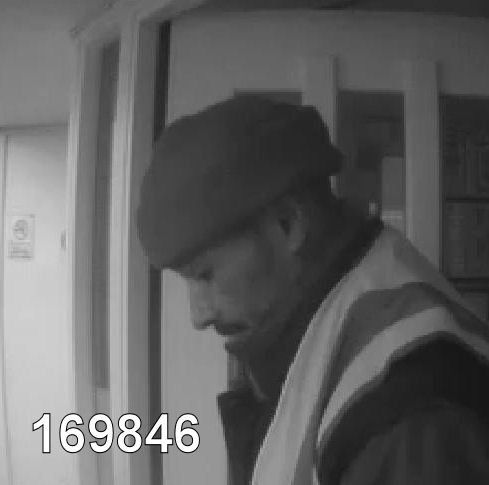 Police in Southwark have released a CCTV image linked to an artifice burglary at the home of a 95-year-old woman in Bermondsey.

The suspect is believed to have gained entry to the victim’s flat in John Roll Way at about 2.30pm on Friday 23 January.

The man was discovered in the flat with the victim when her granddaughter arrived and challenged him.

He claimed to be a mobility driver, but the granddaughter doubted his story and told him to leave.

After he left the flat, the victim’s bag was checked and they found that money was missing from her purse.

Police were called and further enquiries by officers revealed he had also spoken to other residents in the block, giving different explanations as to why he was there.

Detectives from Southwark CID are investigating and are appealing to anyone who has information as to the identity of the man in the CCTV to contact them.

“The victim in this case is an extremely vulnerable and elderly lady, and the suspect has managed somehow to con his way into her flat,” said PC Ashley Larkin.

“We’re eager to hear from anyone who might know or recognise the person on the CCTV image and would ask you to contact us as soon as possible, as we’re concerned they may be targeting other people in the area.”

Anyone with information or who recognises the person in the image should contact police on 101 or call Crimestoppers anonymously on 0800 555 111 quoting reference 169846.

Firefighters are reminding people to cook safely and check their smoke alarms after crews rescued a woman from a flat blaze on Odessa Street  this morning.

The fire damaged part of a flat on the top floor of the seven storey block at New Caledonian Wharf and crews wearing breathing apparatus led the woman to safety down an internal staircase.

It is believed that the fire was started by cooking which had been left unattended.

Station Manager Pat Utting who was at the scene said: “We believe the fire began after a rice pot was left on a stove. Over 60 per cent  of London’s house fires start in the kitchen and we would urge people to never leave their cooking unattended as the consequences can be lethal.

“Unfortunately although the flat had a smoke alarm there was no battery in it.  It’s essential that your home is fitted with a working smoke alarm and that you check it regularly. You should also never remove the battery. Smoke alarms can buy you vital seconds to escape in the event of a fire. In this case the woman we rescued was only alerted after the rice pot on the cooker went ‘pop’.”

All seems OK but nothing can get in or out of Odessa Street @se16 as fire engines stacked up pic.twitter.com/MDRHHQvbGw

Six fire engines and around 35 firefighters and officers from Deptford, Peckham, New Cross, Old Kent Road and Greenwich fire stations attended the incident.  The woman was treated for smoke inhalation. 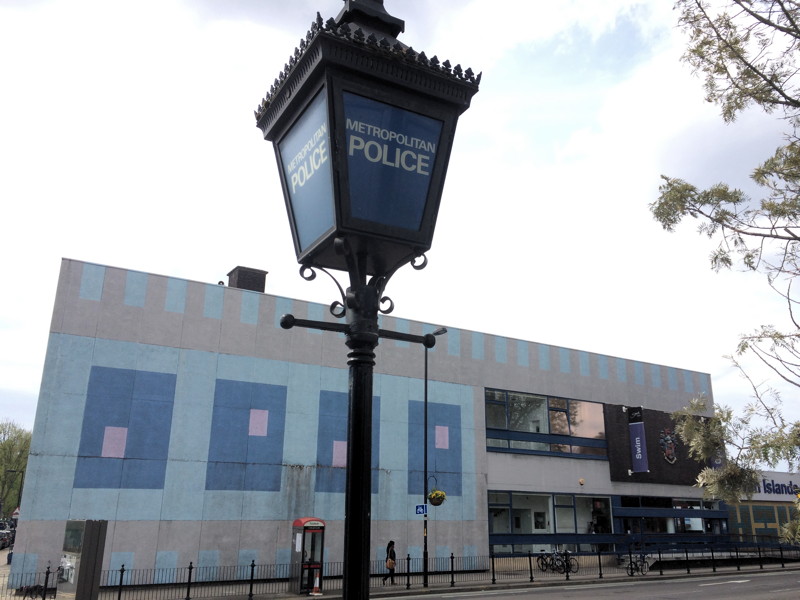 On New Year’s Eve the Mayor’s Office for Policing and Crime (MOPAC) published details of its deal with Southwark Council to relocate the 54 officers based at Rotherhithe Police Station to the nearby Seven Islands Leisure Centre.

The front counter at Rotherhithe Police Station closed in summer 2013 but the building is still the base for the neighbourhood policing team covering the north-eastern corner of Southwark.

In October 2013 Southwark Council offered the Met £250,000 towards the cost of creating a new police base at Seven Islands, just across Lower Road from the police station.

MOPAC says that new locker rooms and showers for the police officers will be created in the redundant gym and backstage area at Seven Islands, whilst the police offices will be located in a new modular building (aka prefab or Portakabin type structure) adjoining the leisure centre.

MOPAC has agreed a ten-year lease with the council but the local authority has the option to terminate the agreement after five years as plans are afoot to replace Seven Islands with a new leisure centre at Canada Water.

MOPAC says that the existing Rotherhithe Police Station has a maintenance backlog estimated at £935,000.

Once Rotherhithe Police Station is empty it will be put up for sale by MOPAC.

A child was taken to hospital with a suspected broken leg after they were hit by a car in Salter Road.

Police were called by London Ambulance Service just before 6pm on Wednesday evening.

The child was taken to a south London hospital with a suspected broken leg.

Police are continuing to investigate the incident and no-one has been arrested.

A murder investigation has been launched after a man shot in the head in Rotherhithe on Sunday afternoon died in hospital.

The 18-year-old man was injured following an incident in Mossington Gardens on the Abbeyfield Estate at approximately 1.55pm on Sunday.

He was taken to an east London hospital where he died on Monday afternoon.

A 19-year-old man who was also injured in the incident has been released from hospital following treatment. He was not shot.

Officers retain an open mind as to the motive behind this incident but there is nothing to suggest at this stage that it was gang related.

From the blog of Riverside Lib Dem councillor Anood Al-Samerai:

I also went along to our ward Safer Neighbourhood police meeting to raise serious concern about the area around Bermondsey tube station. It seems to have become a location for street drinking, begging and littering instead of the proud entrance to our area it should be. The police team agreed this as their priority for the next six weeks, our panel chair (another marvellous local resident) is writing to the Borough Commander and I am also raising the matter with the council.

Following a complaint about inferior DVD box sets being sold via eBay a warrant was obtained for a flat in SE16.

Approximately 800 box sets of various types were found at the address.

These were seized as it was believed they were counterfeit and an investigation is ongoing.