Southwark Council is calling on local organisations, traders or performers to get in touch and be a part of 2014’s Bermondsey Carnival. Whether you are a charity, food and drink specialist, dancer or musician – Southwark wants to hear from you.

Last year more than 6,000 people attended the free event to celebrate the summer in Southwark and all it has to offer. This year’s event will take place on Saturday 28 June at Southwark Park, and with live music, a funfair and entertainment for all the family – this year’s event is set to be another great day out.

A council spokesperson said: “The carnival is an amazing opportunity for local groups, traders and entertainers to show people what they do. It is a platform like no other, so we would really encourage everyone to get involved this year, even if it’s offering an extra pair of hands on the day, and help us make 2014 one to remember.”

Southwark events like Bermondsey Carnival can only happen with the help of local volunteers, so whether you have volunteered before in a similar event or not, the carnival is a great opportunity to get involved and have a fun and rewarding day out at the same time. Volunteer opportunities include assisting artists and performers, stewarding parades, setting up event areas and stage managing.

So if you have a fun and exciting idea for this year, or want to put yourself forward as a volunteer – get in touch with the events team and take part in this year’s carnival. http://www.southwark.gov.uk/bermondseycarnival

Southwark Council has revealed more details of the proposed revamp of the athletics track at Southwark Park.

The proposals to be put forward will include reinstating the athletics track and creating a grassed central pitch to enable, for the first time, a full programme of athletics activities to be delivered for people of all abilities.

The proposal also includes plans to amend the boundary of the sports facility to provide additional land for users of the park.

Funding has also been confirmed for the refurbishment of the park’s pavilion. A public consultation and design development will take place over the next few months.

Councillor Veronica Ward, Cabinet Member for Culture, Leisure, Sport and Volunteering said: “This is a really exciting step for Southwark, and especially for users of Southwark Park and local athletes as a part of our Olympic and Paralympic Legacy. We also hope that the refurbished pavilion will provide facilities to support the athletics development, as well as changing rooms, toilets and refreshment facilities for the benefit of park users.” 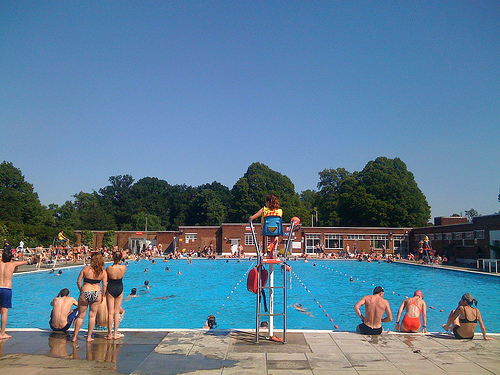 Last week Southwark Liberal Democrats published their manifesto for the borough elections to be held in May this year.

Southwark Liberal Democrats have long supported a refurbishment of Seven Islands Leisure Centre. A Liberal Democrat administration will make this happen, but go further than the current plans by providing a new outdoor lido pool in the heart of Southwark Park.

The original Southwark Park Lido opened in 1923 and closed in 1989.

Russia Dock Woodland and Southwark Park are among eight open spaces in the borough which have secured grants of £10,000 each from the Queen Elizabeth II Fields London Legacy Fund.

The funding will be put towards new natural play equipment in Russia Dock Woodland whilst Southwark Park will see improvements to the paved area at Ada Salter Gardens and the installation of a new artificial cricket pitch.

Councillor Barrie Hargrove, cabinet member for transport, environment and recycling, said: “I am pleased to have been successful in the bids for the London Legacy Funding.

“We now have the opportunity to further invest in our parks with new play facilities for young people and landscape improvements.

“It’s been a fantastic year for our parks across the borough. Not only have we received new Green Flag Awards and opened a first class BMX track, but we’ve also had a really positive response from our recent resident satisfaction survey results.”

“I was delighted to be invited to open the new-look farmyard at Surrey Docks Farm,” said Val.

“The farm is a fantastic local charity and a real jewel in Rotherhithe’s crown. It’s fascinating fun to come and watch all the animals, and this morning as usual there were a number of children having a great time making friends with the goats. T

“he new surface in the yard will make cleaning and drainage easier and makes it very clear that visitors need to wash their hands after being in the animals’ area.

“Gary Jones the farm manager and his team have done a fantastic job – this project has been a real team effort, with input from staff, volunteers and farm committee members. Everyone has shown a great deal of perseverance which has paid off today.

“If you’ve not visited the farm before I highly recommend it – it’s a great day out for anyone of any age.’

The farmyard refurbishment project was funded by the Biffa Award scheme, the Worshipful Company of Farmers and British Land/Surrey Quays Shopping Centre who donated the proceeds of their 2012 Christmas Appeal. 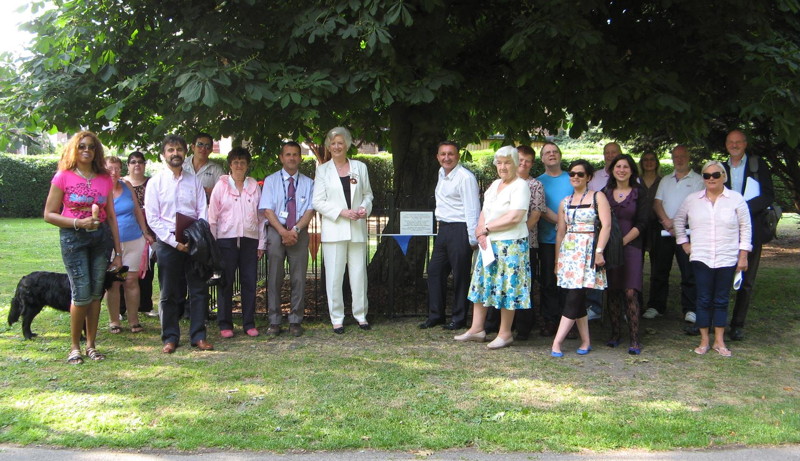 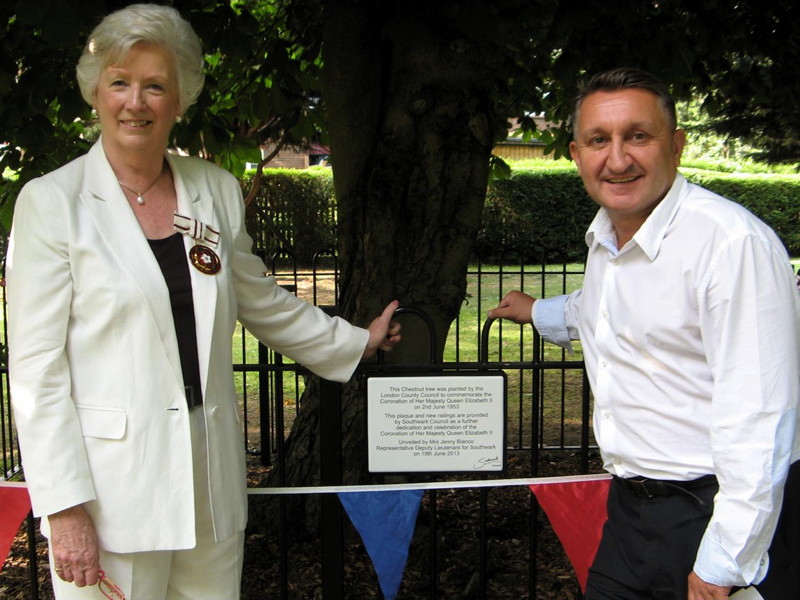 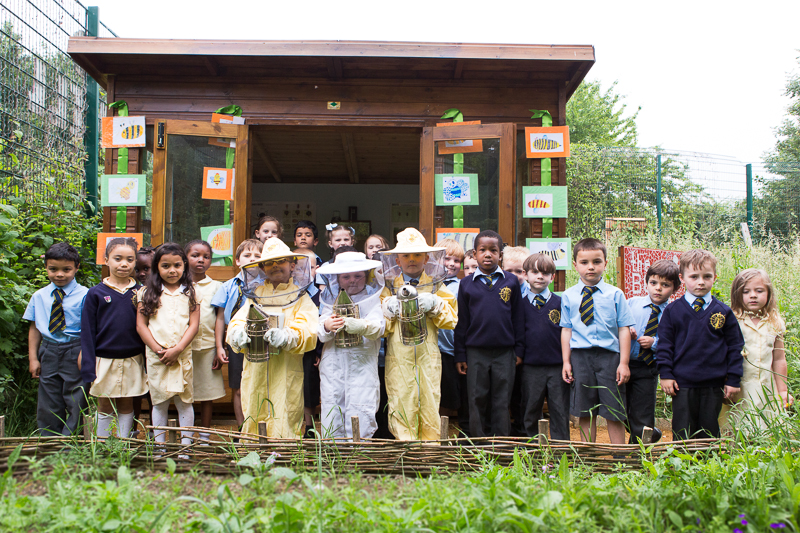 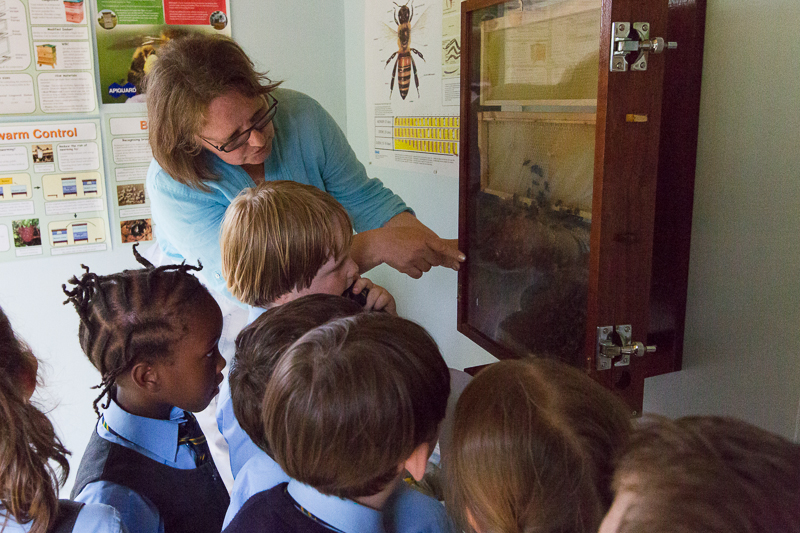 The Bee Observation Centre officially opened at Stave Hill Ecology Park last week and provides a safe way for children and members of the public to watch a working glass fronted hive from a wooden hut without the risk of getting stung.
The kids who came to the opening were the reception year (4-5) from St John’s Primary School in Rotherhithe .
The hives are cared for by beekeeper of the year Sharon Bassey.
Thanks to Vicki Flores of What’s in Wapping for the pics. 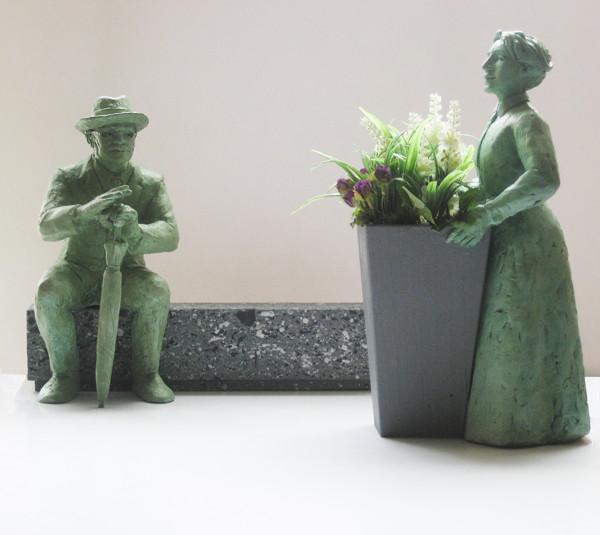 The Friends of Russia Dock Woodland are in the running for an Octavia Hill Award from the National Trust in recognition of their efforts to protect and enhance SE16’s 34-acre woodland.

The London Oktoberfest is coming to Southwark Park this autumn.

After two weekends of beer-related festivities in Kennington Park in late September, the event will shift to Southwark Park for the first weekend of October.

Although the licence application is still pending with Southwark Council, the organisers are already advertising the Bermondsey venue on their website.