Diane Gorvin, the artist behind the original Dr Salter’s Daydream sculptures, has produced ideas for a new commission which will not only replace the stolen statue of Dr Alfred Salter but also include a new sculpture of his wife Ada.

The complete work will include the sculptures of their daughter Joyce and her cat which were placed in storage after the theft of the Dr Salter statue from the Thames Path in November 2011.

The Salter Statues Campaign has raised more than £10,000 so far. Treasurer Catherine Dale said: “It was devastating when the statue of Dr Salter was stolen but we are making the most of a bad situation by aiming to raise enough money to commemorate Ada Salter as well.”

Cllr Veronica Ward,  Southwark’s cabinet member for culture, said: “We were very much saddened when Dr Alfred Salter’s statue was stolen in 2011.

“Our artworks are celebrated by our residents and play an important part in the lives of our local community. It is because of this that we have supported the Salter Statues group and have pledged to match the funding they raise to take steps to permanently replace the statues plus necessary security works.”

Artist Diane Gorvin said of her drawings: “Dr Salter’s Daydream 2013 will be expanded by the welcome addition of Ada, a remarkable woman who deserves recognition for her many good works to benefit the people of Bermondsey.

“Alfred and Ada Salter worked so hard that they did not have much time to relax, but after the birth of Joyce they made a garden at their home, a ‘green parlour’ where their ‘sunshine’ could play. This is the memory I wish to evoke for Dr Salter.”

Diane welcomes additional photographs of Alfred and Ada Salter to ensure their likenesses are as accurate as possible.   Any photos or contributions should be sent to [email protected]

Located on the corner of Albion Street and Neptune Street, the project was awarded Cleaner Greener Safer funding by the former Rotherhithe Community Council in September 2011.

The space was redesigned in consultation with the Irwell Estate Community, local businesses and Albion Street Steering Group to create a more open, safer area with clearer views through to the playground and over Albion Street and St Olav’s Church.

Cllr Barrie Hargrove said: “This sort of project is exactly what the Cleaner Greener Safer funding was designed for. We hope users of the garden space will now enjoy this pleasant and calming area for years to come.”

The Earl of Wessex’s visit to King’s Stairs Gardens was a memorable local occasion.

Southwark Council’s official film of the Queen’s 1977 visit to King’s Stairs Gardens has this week been published on YouTube by the London’s Screen Archives network.

Two of the 99 ‘tiny games’ to be found around London until 20 August are right here in SE16 at the Blue market and Canada Water Plaza.

The free games are designed to be played on the spot with everything needed to play the game being contained within a simple vinyl poster and the surrounding environment.

Games have sprung up around the capital in bandstands and parks, on paths and tube station walls; on high streets, by shopping centres, under archways, in corners, in squares, by statues and lakes and bus-stops.

The playful experiences were created by London game design studio Hide&Seek and Southwark Council has worked with the design team to bring the innovative experience to the borough.

“The biggest sporting event of the summer has created great opportunities for everyone to get involved in sports across Southwark and this one of them,” says Cllr Veronica Ward, Southwark’s cabinet member for culture, leisure, sport and the Olympics.

“It’s a great community-building activity which can be enjoyed by young people, family members, groups of friends or even neighbours.”

To find out more about Hide&Seek’s 99 Tiny Games visit www.99tinygames.co.uk 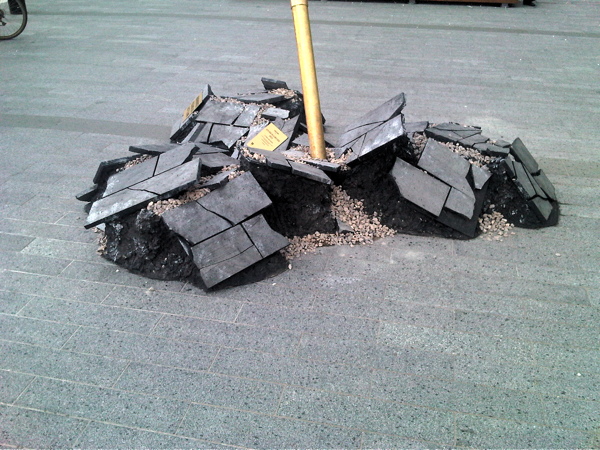 In celebration of the Olympic Games starting this week, Canada Water Plaza (or is it Deal Porter Plaza?) has received a “gift from the gods” in the form of an Olympic Javelin. The 10m-long installation will be on show throughout the Olympic period for all to enjoy.

“This installation is spectacular and is really adding to the excitement of the Olympics in Southwark,” says Cllr Veronica Ward.

“We cannot wait to see the torch on Thursday as it travels across the borough”.

The Bermondsey Carnival is being held in Southwark Park on Saturday 2 June and Southwark Council is looking for stallholders for the ‘Rumble in the Jubilee Jumble‘ section of the event.

This is a jumble sale on a grand scale to promote the re-use of unwanted items and the council is inviting local groups to apply for stalls.

Stalls are free (subject to £20 refundable deposit) and all stall space must be dedicated to the jumble; no leaflets or promotional material are to be placed on or distributed from the stall.

The deadline for applications is Friday 25 May – details here.