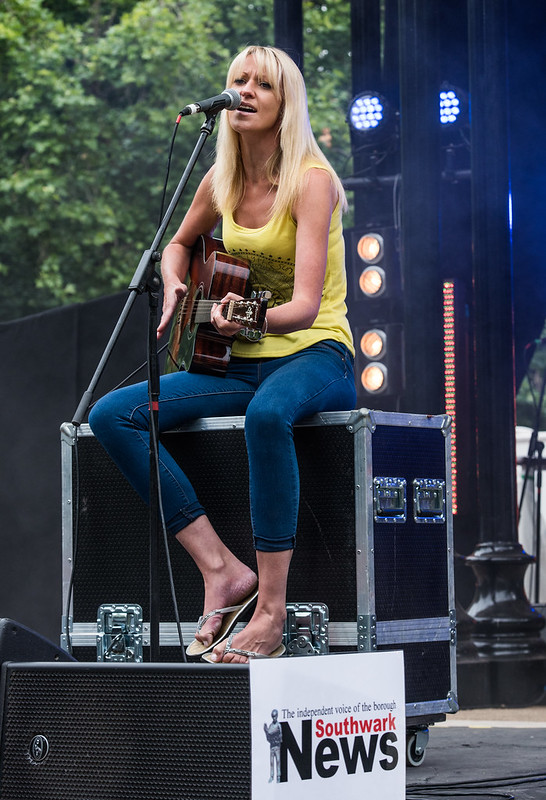 From January 2016 London Bubble theatre company will have 2 office/desk spaces available for rent in its open plan premises in Elephant Lane.

The spaces are fully accessible, available 7 days per week, day time and evenings. All spaces have wifi.

T​he Rotherhithe & Bermondsey Choral Society have begun rehearsals for their Christmas Concert in December.
They will be singing highlights from J S Bach’s Christmas Oratario and Christmas Carols from around the world.
Rehearsals take place on Tuesdays 8pm to 9.45pm at Time and Talents, St. Marychurch Street, SE16 4JE​
Visit www.rbcs-choir.org.uk or email [email protected] to find out how you can get involved.
A new play about Ada Salter – first woman mayor of Bermondsey – received its premiere last month. The next scheduled performances of Red Flag over Bermondsey are at the Barnstaple Fringe Festival in June.
From the Ada Salter Facebook page:

Its theatre groups are friendly, fun and creative, and include games and exercises which will help to develop confidence and a range of performance skills.

Set in run down Bermondsey during two world wars, ‘Politic Man’ is the true story of Alfred Salter and his wife Ada, who between them, stood for local, mayoral and parliamentary elections throughout their lives while living and working in one of the most impoverished areas of London: Bermondsey.

A Bermondsey community choir has received £15,000 in funding from the City of London Corporation to take part in the Lord Mayor’s Show on Saturday 8 November.

Bermondsey Voices, who rehearse at St James’s Church on Thurland Road, will enter a ‘History of Bermondsey’ float in the show – focussing on the sights and songs of “Biscuit Town” down the years. On the day, members of the choir will dress up in period costume and sing their hearts out.

The choir will make parts of Bermondsey history come alive with songs composed by local musician Mike Mansbridge for The Lord Mayor’s Show.

Bermondsey Voices member Abenaa Baffoe said: “This choir is a team and there has been a marked increase in the self-esteem and confidence of our members since we started.  Singing makes us feel uplifted and positive, and as a group we want to take the next step and improve on these benefits. We have come a long way and though it will be a challenge performing at such a large event – it will be a huge step forward for us and it will help us attract more members.”

Simon Hughes, MP for Bermondsey and Old Southwark, said: “I am delighted that one of our local community choirs, Bermondsey Voices, has been chosen to perform in the prestigious Lord Mayor’s Show this November. They will have the chance to tell the story of Bermondsey to a televised audience of millions across London and the UK. I will look forward to hearing some of the specially composed Bermondsey songs that the choir tell me are ready for the occasion!”

Lord Mayor’s Show Pageantmaster Dominic Reid, who has run Lord Mayor’s Show for 23 years, said: “I’m really pleased to have Bermondsey Voices in this year’s Show. They have some exciting ideas and I’m looking forward to seeing their float on the big day.”

Bermondsey Voices started in May 2012 to promote singing in the community. The choir meet on Tuesday evenings from 7.30pm to 9pm.

The majority of the choir members are British but it also has members from Sweden, Belgium, Australia and Ghana.  Since 2012 the choir has yearly Summer and Christmas concerts at St James Church, has just performed at the Bermondsey Street Festival for the third year in a row, has taken part in Festival of Neighbourhood at Southbank Centre, performed in the play The Events at Young Vic and are in the planning stages of hosting Bermondsey Choir Festival which will take place in 2015.

A while ago we covered London Bubble’s new intergenerational project for 2014-15 – Hopelessly De-Voted – which explores engagement and disengagement with the political system.

There are a number of ways local residents can get involved:

Join the group of researchers and interviewers
Help to interview those people who are part of the political system – the politicians, the voters, the stylists, the media spinners.

Join London Bubble’s intergenerational drama group
Meets Thursdays, 6.30-8.30pm
A group of all ages to research and explore this topic. The testimony and information gathered during the interviews will be developed during Bubble’s weekly workshops and will form the basis of a script. This will be performed by an intergeneration community cast in March and April 2015 – the run up to the election in May.

Do you believe in our democratic system? Or do you share Russell Brand’s view? Either way,  London Bubble wants to hear from you.

We pride ourselves on ‘our democratic system’ but do we believe in it. Or is the system just too big to change?

London Bubble Theatre Company is looking for volunteers to help it take a snapshot of people’s feelings about the electoral system.

Between now and the next election the company will be recording conversations between people on different sides of the debate and creating a play to be performed by a community cast.

Now young Bubble members are widening their search and are interested in interviewing members of the general public who either strongly believe in the system, or who steadfastly refuse to vote.

They are interested in talking to a range of ages so if you have something to say, please get in touch. (Or perhaps you come from Belgium or Australia where voting is compulsory, or from Estonia where not only can you vote by phone, but you can change that vote at any time leading up to Election Day!)

The research stage of the project is being supported by the Arts Council of England and Bubble will be working with campaigning group Bite the Ballot, to turn the words of voters, politicians, cynics and sceptics into a script reflecting Londoners love-hate relationship with our political system.

If all goes to plan the piece will be performed by a inter-generational community cast in the Spring 2015, during the run up to the election in May. And who knows, it might even increase the turn out.

Those interested in contributing to Hopelessly De-Voted should contact Claire Sexton at London Bubble on 020 7237 4434, [email protected]