Police are appealing for information after a laptop was stolen from a charity during a burglary.

The burglary occurred at around 4.45am on Wednesday 18 November, at the premises of Homes 4 Heroes in the Surdoc Club, Cope Street, Rotherhithe.

A white Toshiba laptop Satellite C55 DA14 was stolen during the burglary and it contained templates used to make identity passes for the charity’s representatives.

The charity has now changed the passes for its staff and volunteers, but advises if anyone has any concerns about someone claiming to be from the charity they should contact UK Homes 4 Heroes on 020 7237 6363.

If anyone has any information regarding either the burglary, or the whereabouts of the laptop, they should call Southwark Police’s CID on 101 or Crimestoppers anonymously on 0800 555111, quoting crime reference 3033697/15.

A 28-year-old man was arrested in connection with the burglary on Thursday 19 November. He has been charged with burglary and will appear at Camberwell Green Magistrates’ Court on Friday 20 November.

All the details are here: 15-10-20 NatNetJobPoster 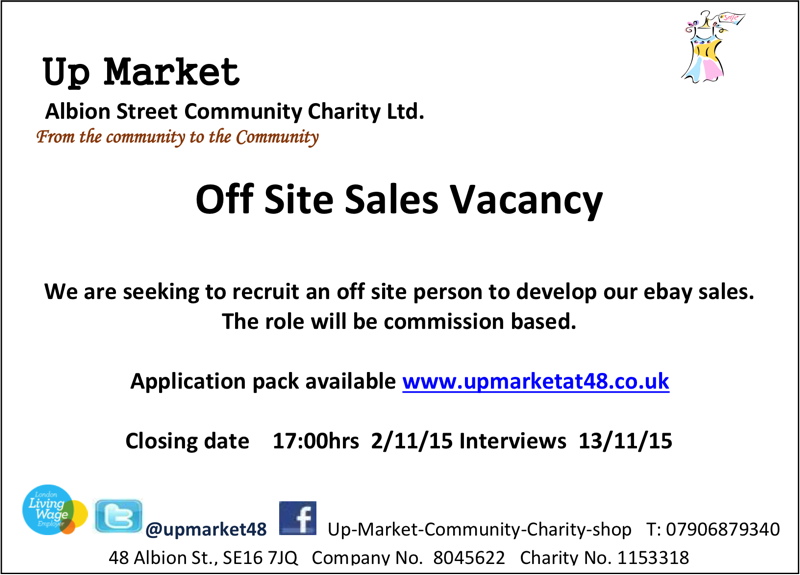 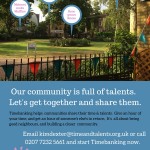 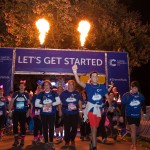 Cancer Research UK is advising local residents that the area around Southwark Park will be busy on Saturday evening 26 September as thousands of people converge on Southwark Park for the start of the charity’s Shine Night Walk .

Bus stops on Jamaica Road will also be affected.

Traffic management stewards will be supervising the area on the night and clear signage will be displayed prior to the event.

Shine Night Walk, in partnership with Scottish Power, brings a unique glow to the capital as participants illuminate themselves with lights, flashing headbands and sparkling outfits to form a human road of light as they walk through the capital.

The moving parade of light symbolises the hope the charity’s research scientists bring to the dark days of cancer and celebrates the progress that has been made so far.

Organisers hope this year 17,000 men, women and children will paint the town neon and help raise almost £5 million to bring forward the day when all cancers are cured. Since it began in 2010, Shine Night Walk has raised  £18 million to help fund Cancer Research UK’s lifesaving work.

Bermondsey residents are being invited to drop off quality clothes, books, toys and household goods at their local Safestore for their month-long ‘Great Donate’ challenge which aims to collect as much stock as possible for the disability charity Scope.

It is the fifth year that Safestore, the UK’s largest self storage company, has teamed up with Scope and donations are being accepted at all 97 Safestore branches, including Safestore Bermondsey in Old Jamaica Road, throughout the month of July.

The items will then be sold by Scope across its network of almost 240 charity shops located across the country, raising funds to support its work with disabled people.

Safestore Bermondsey manager Alex Blair said: “We are delighted to again be partnering with Scope for ‘The Great Donate’ challenge. We want as many people as possible to get involved by donating any good quality items, clothes and accessories that they no longer need so that they can be sold in Scope shops. It is a very worthy cause so we hope that residents in Southwark will be really generous.”

Sasha Philips, Stock Generation Manager at Scope said: “We are delighted that Safestore are taking part in Scope’s 2015 National Stock Appeal this July.”

“As well as going to Scope shops, people can drop off their donations at their local Safestore making it even more convenient to declutter and donate.”

“All profits from the sale of donated items will go towards Scope’s work to support disabled people and their families to live the lives they choose.”

The nearest Scope charity shops are in Camberwell, Peckham and Lewisham

United St Saviour’s Charity has revealed its plans to create an ‘almshouse for the 21st century’ at the site of the former Southwark Park Nursing Home in Southwark Park Road.

The project is funded by developer Delancey in lieu of providing any affordable housing in their scheme at 185 Park Street, next to Tate Modern. 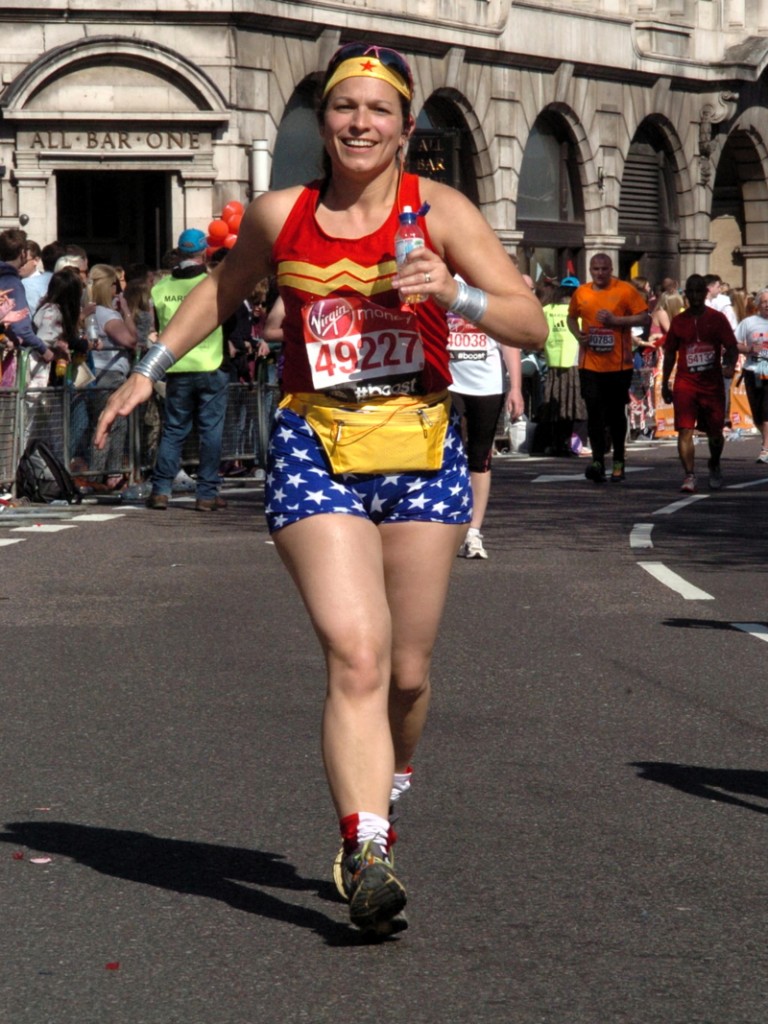 Surrey Docks councillor Lisa Rajan will join thousands of other runners in the London Marathon this Sunday.

The marathon route passes through the borough starting at Lower Road and works its way around the Rotherhithe peninsula and Bermondsey before heading over Tower Bridge into the City.

But not content with completing the course in regular sports gear, Cllr Rajan has chosen to run the 26-mile course dressed as super-hero Wonder Woman.

The Liberal Democrat councillor is raising money for the Reverse Rett charity, which funds research into the devastating rare condition Rett Syndrome, and has already raised over £1,250 for the cause. Further donations are still welcome and can be made online at: https://www.justgiving.com/lisarajan4/

“For the second year running, I am dusting off my favourite Wonder Woman outfit and embarrassing myself in front of Southwark residents,” said Cllr Rajan.

“I’m not looking to break any speed records but I do hope at least to make it to the finish line ahead of any rhinos or bananas!

“This year I’m running it for a brilliant charity called ReverseRett.

“They fund research into the devastating rare condition Rett Syndrome, which causes severe mental and physical disability in young girls around their first birthday.

“I’m hoping to raise as much as I can to make a small difference to families living with Rett.”

Browne Jacobson will work closely with Bede House on various fundraising initiatives throughout the year. They will take an active role in the charity’s projects such as supporting the development of local plays, attending charitable functions and providing sponsorship funding. The firm have organised a staff quiz at the end of March with all proceeds going to the charity and they will also be supporting Bede House with interview role plays in May.

Prior to working with Bede House the law firm raised over £5,000 for Hackney based charity St Joseph’s Hospice. Over the course of two years they worked with them on a range of fundraisers which included jeans days and cake bake offs.

“We are delighted to have been chosen as Browne Jacobson’s charity of the year,” said Bede House’s Nick Dunne.

“As a small, local charity this kind of support is vital to us and we look forward to us working together in the next 12 months”.

David Maggs, partner at Browne Jacobson, added: “We are delighted to be supporting a charity that provides such a crucial service to the local community. The Bede House staff and volunteers provide an invaluable service and support network to the Southwark neighbourhood.

“Both myself and my colleagues are looking forward to working with the team over the coming year, hoping to draw attention to the fantastic work they already do, as well as continue to raise funds for the charity and its community.”

Every year each of Browne Jacobson’s offices nominates a local charity to support in their area.  Last year the firm managed to raise over £28,000 for good causes across its five office network, this included the firm’s trainee lawyers joining up from all offices to complete a cycle challenge, raising money for a cancer charity.