The council has published a detailed report on the plans to relocate Bermondsey One Stop Shop from Spa Road to the Blue.

The new facility will be much smaller than the current one and visitors will be encouraged to make a prior appointment rather than just dropping in.

Proposals for  a front desk service at the council’s Tooley Street offices appear to have been abandoned.

The Queen and Duke of Edinburgh will visit Greenland Pier on the morning of Wednesday 25 April to name the new royal row barge ‘Gloriana’ that has been built for the Queen’s Diamond Jubilee Pageant in June.

‘Gloriana’ was lowered into the water for the first time on Thursday at Isleworth.

The royal visitors will stop off at Greenland Pier on their way to Greenwich for the reopening of the Cutty Sark and the opening of the Royal River exhibition at the National Maritime Museum.

“KPMG Thames Clippers are delighted to provide Greenland Pier for this important event and apologise to customers for any inconvenience caused to your intended journey,” said the company in an email to passengers on Friday.

Wednesday night was the final meeting of Rotherhithe Community Council before the controversial merger with Bermondsey takes effect.

Councillors have been busy updating their blogs with reports of the meeting:

Police are appealing for witnesses after a woman was raped in Bermondsey.

Shortly before midnight on Friday 13 April (into Saturday morning) the victim was in Southwark Park Road at the junction with Galleywall Road.

The victim was approached from behind by a man and raped under a railway arch on Southwark Park Road.

The suspect is described as a black man, around 5″ 8′ tall, stocky build, between 30 and 40 years old with a scar on his left cheek. He was wearing a denim jacket and denim trousers. 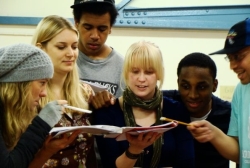 The new term at London Bubble starts on 24 April.

They have groups for:

These weekly sessions give the opportunity for a wide range of people to make theatre together, assisted by experienced theatre practitioners and other specialists.