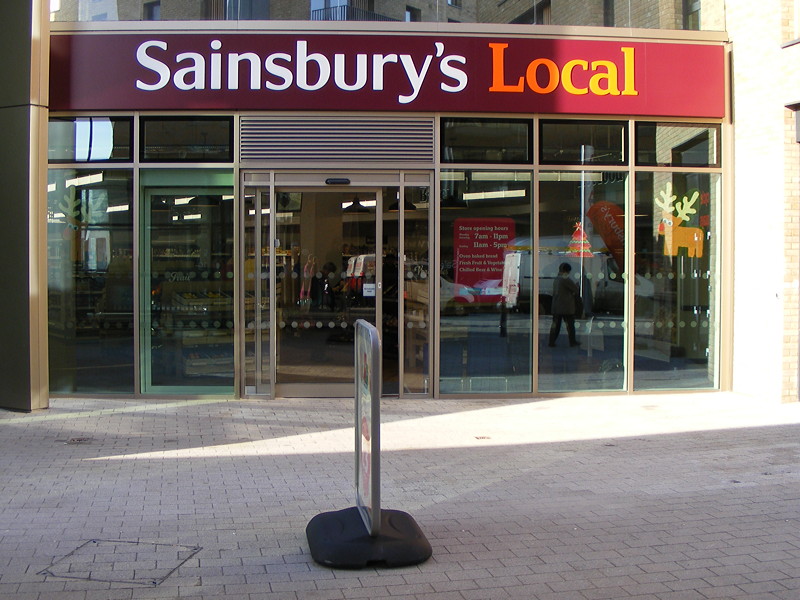 The new Sainsbury’s Local store at the bottom of the Ontario Point tower, Canada Water, opened its doors on Tuesday morning.

The store is Sainsbury’s first foray into SE16, with the nearest branches being at Bermondsey Square and New Cross.

The shop is larger than many of the local convenience stores. Indeed, the size of the trading area means that its  opening hours are restricted by Sunday trading legislation.

The Tesco Extra store at Surrey Quays Shopping Centre has, without warning, reduced its opening hours.

The new hours are as follows:

A new branch of Poundland opened this week in the former WHSmith store at Surrey Quays Shopping Centre. 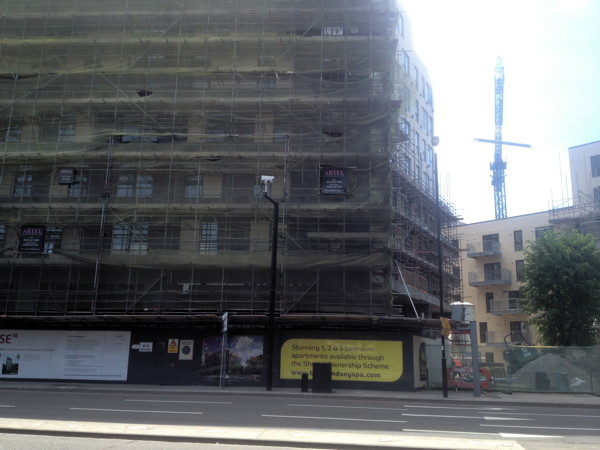 A Tesco Metro supermarket is open at the Parker Building in Jamaica Road, near the Abbey Street junction.

Tesco Metro is the chain’s medium-size format, larger than the Tesco Express convenience shop. A similar store can be found in Tooley Street.

Tesco has submitted planning applications to Southwark Council for a new shopfront and bank machine. The chain has also applied for advertisement consent for new signage.

A meeting of the Albion Street Steering Group took place on Wednesday 5 June.
The ASSG is a group consisting of local representatives that was created by Southwark Council in April 2011 with a remit to influence the development of Albion Street in a way that reflects the needs and aspirations of the local community.
Any queries should be directed to the secretary to the group at [email protected].

British Land has announced the purchase of its joint venture partner Tesco’s 50 per centholding in the 300,000 sq ft Surrey Quays Shopping Centre for £48 million.

As part of the deal Tesco has taken out a a new long-term lease on its store and the petrol station.

British Land says it intends to progress plans in 2014 (subject to planning) for a £38 million upgrade of the shopping centre which will include a 100,000 sq ft extension, the extensive refurbishment of the existing centre along with improvements to public spaces and connections to Surrey Quays and Canada Water tube and bus stations.

Charles Maudsley, head of retail at British Land said: “We intend to create a modern retail environment to attract the growing, affluent local catchment.  We are aiming to take the scheme beyond its current functional shop by broadening the tenant mix and introducing larger retail units alongside a more attractive food offer.  All this should increase overall spend.”

David Dutton of DMGT said: “After many successful years at Harmsworth Quays, DMGT is delighted to be transferring its interests in the site over to British Land.  The redevelopment of our printing plant provides an exciting opportunity for the area and we are confident British Land is ideally placed to deliver what the area needs.” Cllr Fiona Colley, cabinet Member for regeneration at Southwark Council, said:

“Rotherhithe has seen some great improvements over the last few years including the new Canada Water library and better transport links thanks to the new London Overground service. We want to keep the momentum going by ensuring that land is put to really good use.

“In addition to new homes, the redevelopment of Harmsworth Quays has the potential to deliver the town centre and jobs that Rotherhithe really needs. I’m delighted that British Land have also agreed to work with the Council to explore whether we can build a new campus for Kings College London on the site, which is something I know would be welcomed locally.”

See this ad on the SE1 website for details. Closing date is Wednesday, so hurry!

Last month Southwark Council’s cabinet agreed to the next stage of work towards the rejuvenation of Albion Street.

The council says it will work with local residents on the Albion Street Regeneration Framework which will have four main strands.

The next stages include proposals to expand Albion Primary School, further consultation with residents on the Albion Estate to see how they can benefit from wider regeneration, ensuring that the redevelopment of the former Rotherhithe Library on Albion Street supports the hopes of local people and enhancing public spaces in the area.

Cllr Fiona Colley, cabinet member for regeneration and corporate strategy said: “Albion Street was once a lively and successful area – home to a popular street market and at the heart of the Rotherhithe community.

“Despite the tremendous changes we have seen in the Rotherhithe and Canada Water area, Albion Street area has not really felt the benefits.

“We are fortunate that there is a lot of enthusiasm and many great ideas coming forward from local tenants, residents, councillors, businesses and groups such as the Scandinavian churches. We want to make sure that there is a role for all local representatives to get involved in improving the area.” 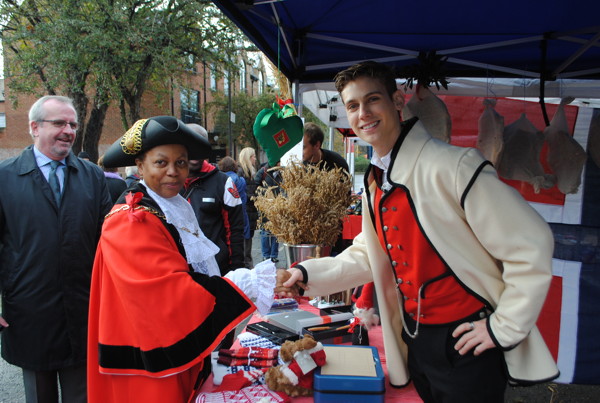 Southwark Council says that up to 20,000 shoppers enjoyed the Scandinavian Christmas Market outside the Finnish and Norwegian Churches in Albion Street this past weekend..

Around 40 traders from overseas and closer to home offered a range of goods and present ideas, decorations and hearty Scandinavian food.

Visitors also had the chance to be photographed with husky dogs and even meet the Ice Queen and Father Christmas.

“The Scandinavian Market has proven to be a great way to kick off the festive season, and was a wonderful opportunity for another of Southwark’s international communities to introduce us to something new,” said Cllr Barrie Hargrove, cabinet member for environment, transport and recycling.

From last week’s Council Assembly:
QUESTION TO THE CABINET MEMBER FOR TRANSPORT, ENVIRONMENT AND RECYCLING FROM COUNCILLOR DENISE CAPSTICK

The parking bay was installed for the purpose of providing car parking for visitors to local stores. The dimensions of the bay are unsuitable for accommodation of large delivery vehicles although there is not a loading ban in operation in this area.
Observations have shown that vehicles making deliveries to the store are too large to fit wholly within the parking bay. Delivery vehicles then extend onto the double yellow lines or, if the parking bay is occupied by a car, double park. This is causing obstruction of the westbound traffic lane. Currently this can only be dealt with by issuing parking tickets on the vehicles causing the obstruction.

Tesco’s transport consultants have indicated that they would be prepared to pay for a five metre west-ward extension of bay and changing its use so that only delivery vehicles can park in it during certain hours (8am-11am) and by shoppers outside of those hours. It is noted that the extension of the bay would only be possible with the removal of the adjacent plane tree and approximately five metres of footway.

A proposal will be brought to the local community council for a decision within the next three months.
Regarding the cages on the footway, we have brought the issue to the notice of the store manager and will continue to inspect the area and take enforcement action when we find evidence of an obstruction on the highway.